Barcelona in 1 day, right? That is simply not to do but we can make a good attempt to get a good impression of the city. 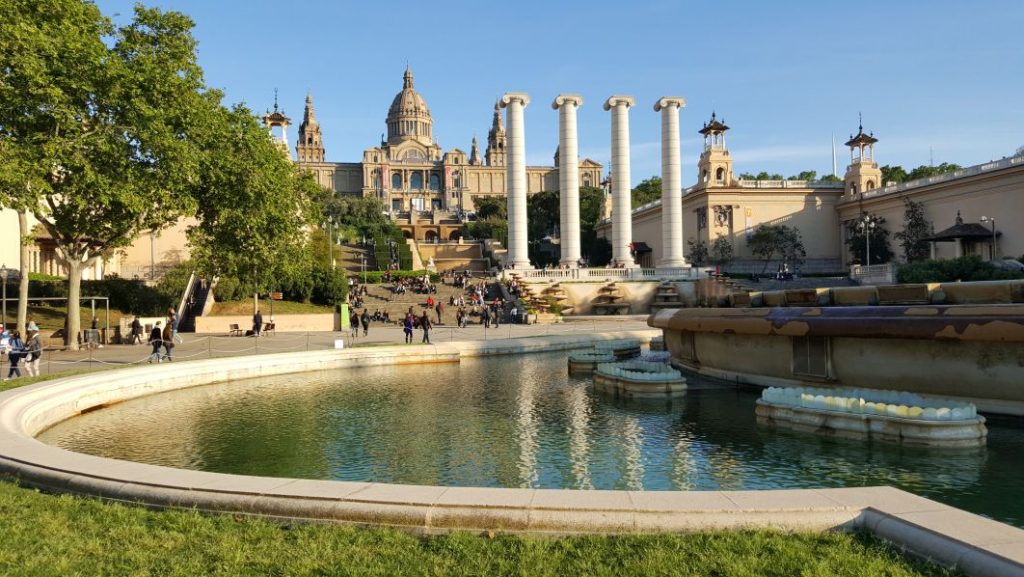 It is not very illogical, by the way, that you only visit Barcelona for 1 day. How many people do not stay along the costa or in the French Languedoc and want to spend a day doing this beautiful city? Well, here is an idea how you could handle it. Of course there are infinite alternatives to think of.

We left Perpignan in France. Armed with the visa card we drove up the highway and were within a short time at the Spanish border. To our right the snowy peaks of the Pyrenees line up against the bright blue sky. 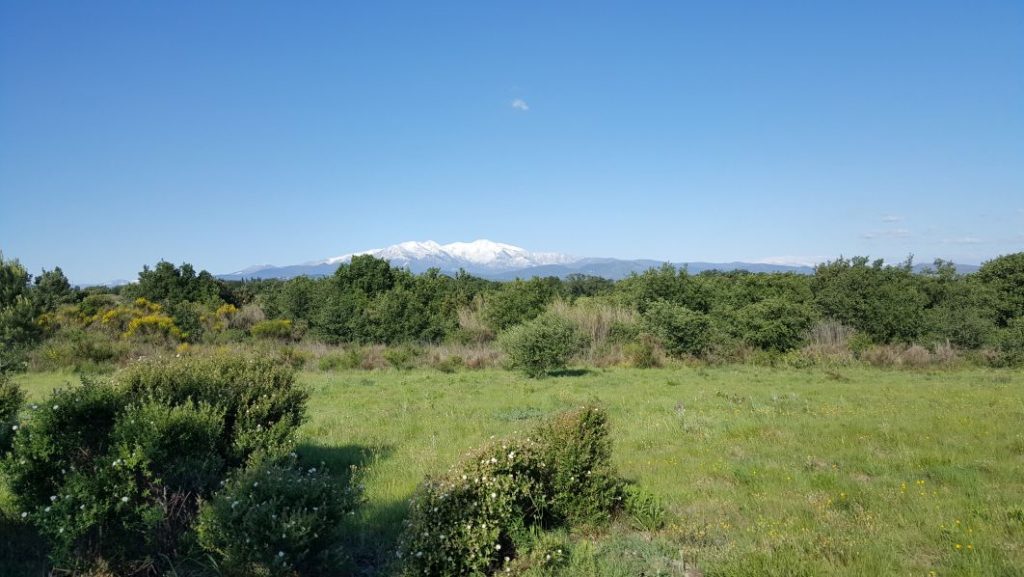 The Spanish toll roads work the same as the French so that was no problem. Our idea was to find a parking garage on the northern edge of the city near a metro station and near the highway. We discussed this beforehand and we chose “Aparcament Municipal Plaça del Fòrum” on the B-10. You drive from the highway into the parking garage and walk on the other side where you find the metro station El Maresme / Fòrum in the Carrer de Llull. Parking is not cheap. We lost about 30 euros, but everything better than an empty stolen car. From the Costa’s you can of course take the train which brings you to the central station where you can use the metro in all directions.

Our party consisted of 3 teenagers and 2 adults. The travel program must be adjusted accordingly otherwise we will get crooked faces. So we start with something serious now that it is still possible, the Sagrada Familia. We buy 10 tickets because it is simply cheaper than 5 day tickets. I take the ticket 5x through the machine and step on the yellow line to La Pau and change to purple to the Sagrada Familia. When we come out of the metro we are immediately face to face with this world-famous, still incomplete work by Gaudi. 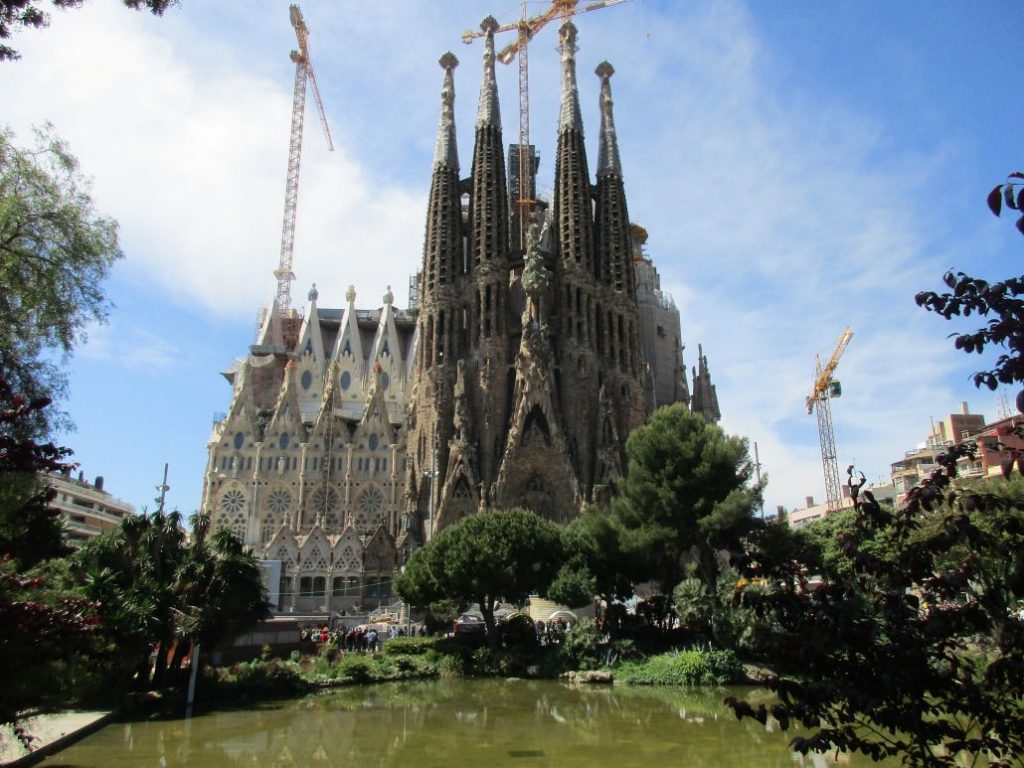 The Sagrada Familia is of course an unmissable highlight of Barcelone. We do not go inside but do a round in front, taking some pictures between all the shrieks of the many tourists. It does not really interest the children, so they quickly have their way back to the subway. On to the Arc de Triompf.

The Arc, built from red bricks, is not a military building, unlike other famous Triumphal arches, but served as the entrance to the world exhibition in 1888. It was held in the nearby Parc de Ciutadella. 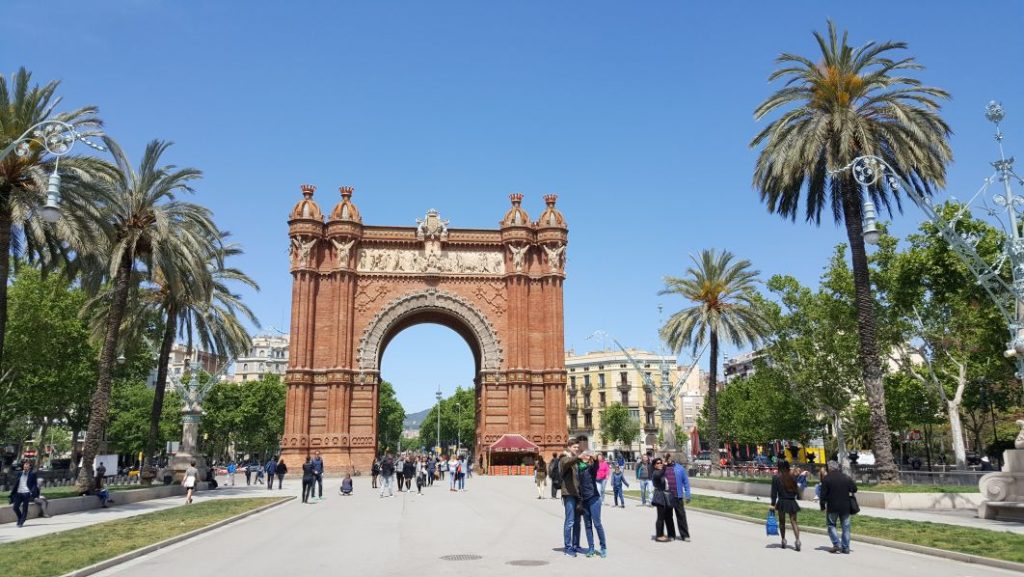 We walk under the arch towards the park. It is here immediately less crowded and more comfortable to stay in the sun. When we arrive at the park we turn left towards the De Font de la Cascada, a fantastic fountain. The vegetation in the park is also very tropical. It is beautiful and many a painter has put his donkey in the park. 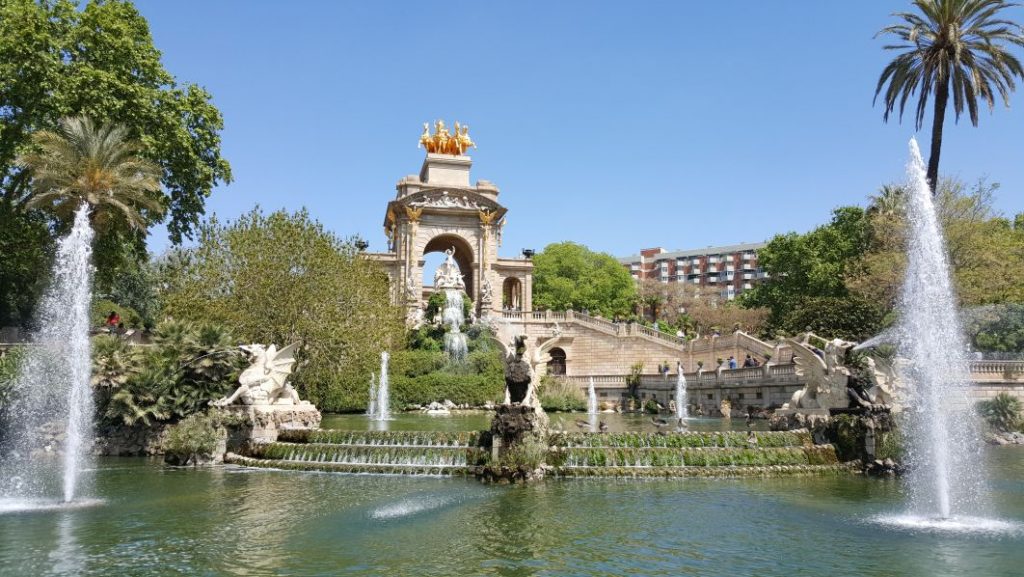 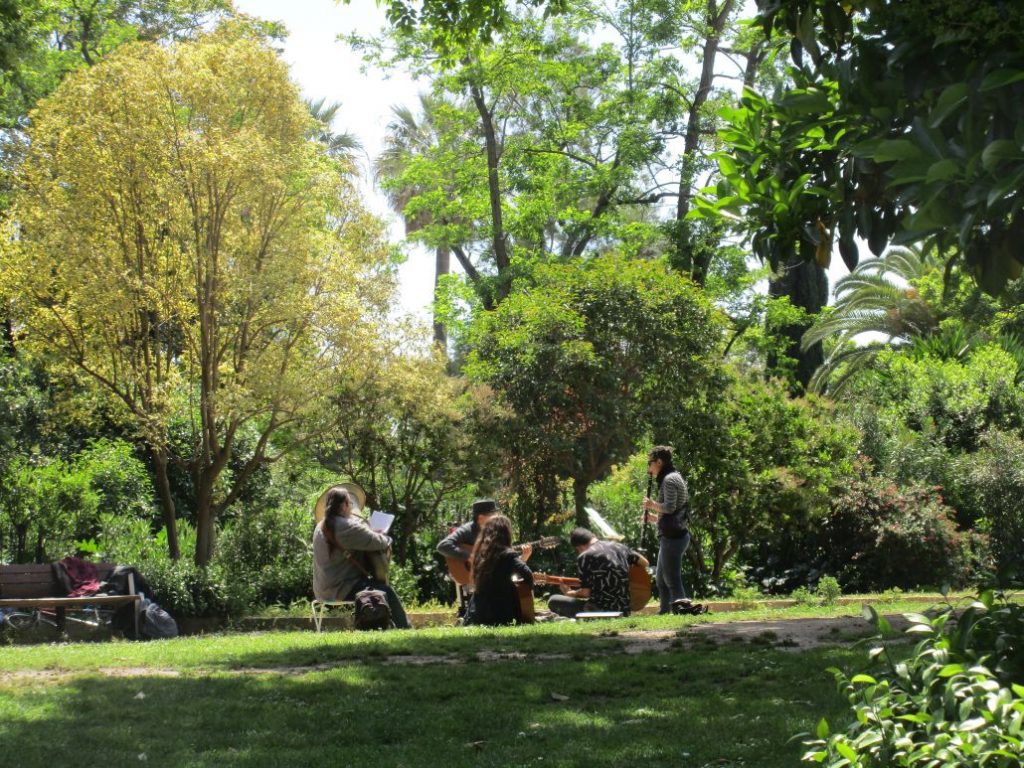 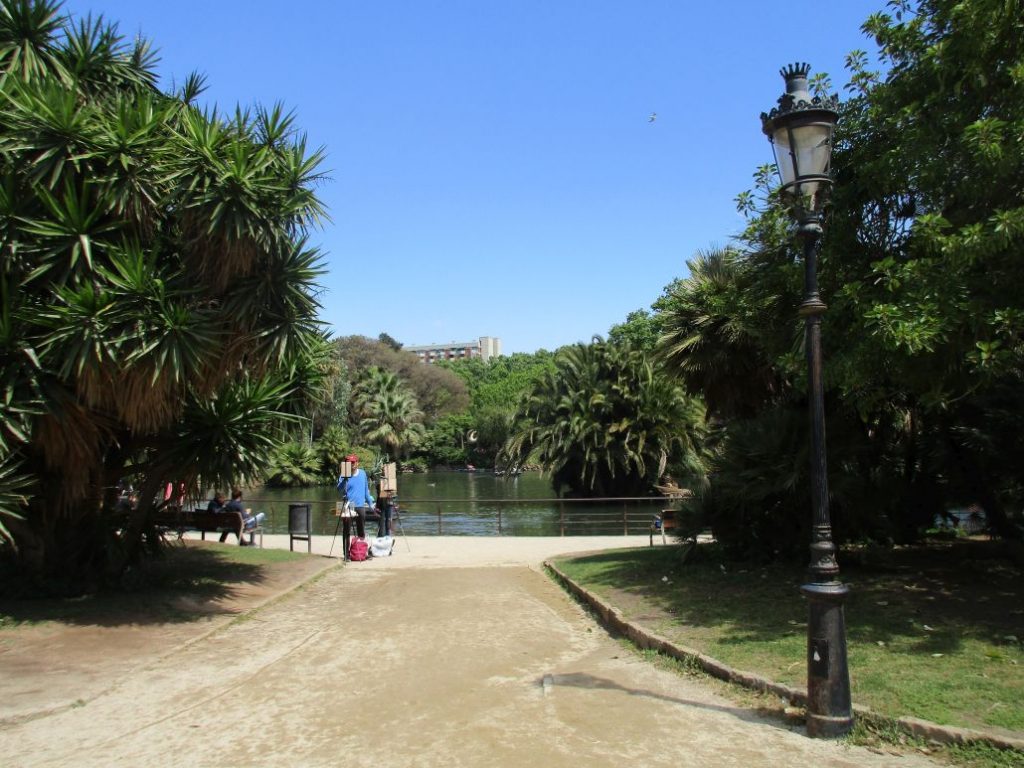 We walk in a southerly direction and leave the park towards the Av. del Marquès de l’Argentera where the central station is located. Opposite the station we turn right again into the Carrer del Comerç and arrive at the Antiek Marked. 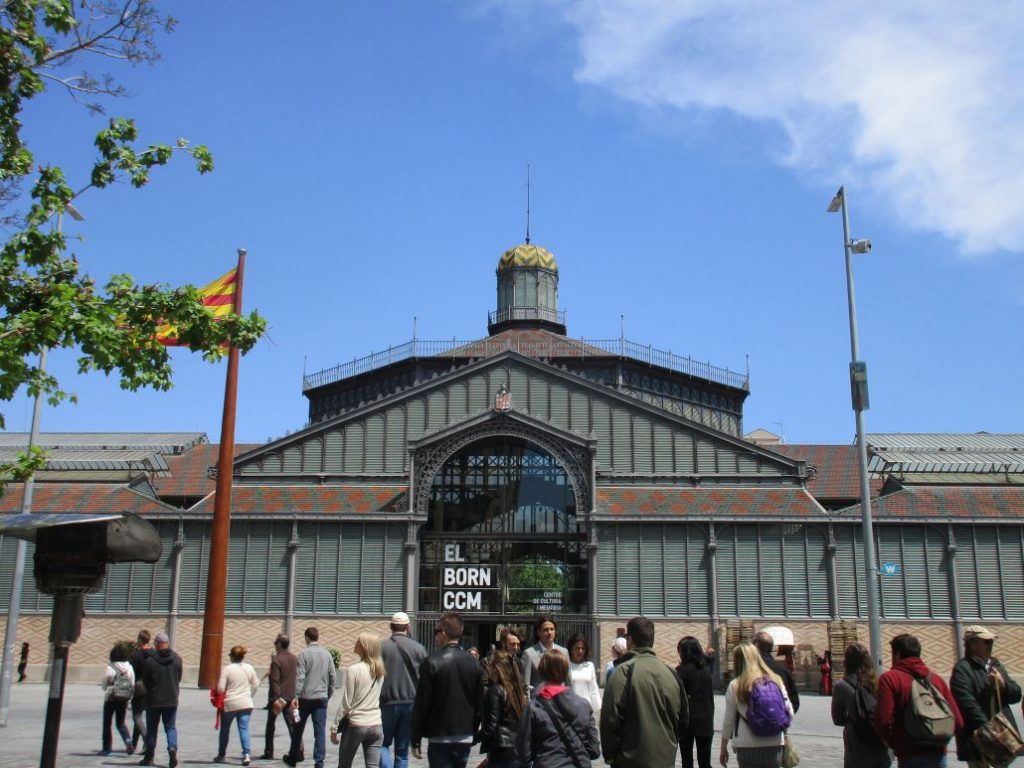 It is noon now, so across the hall we go into the Caso Nova for tapas. We order different kinds of small dishes that we do not even know what we ordered. It is all delicious. 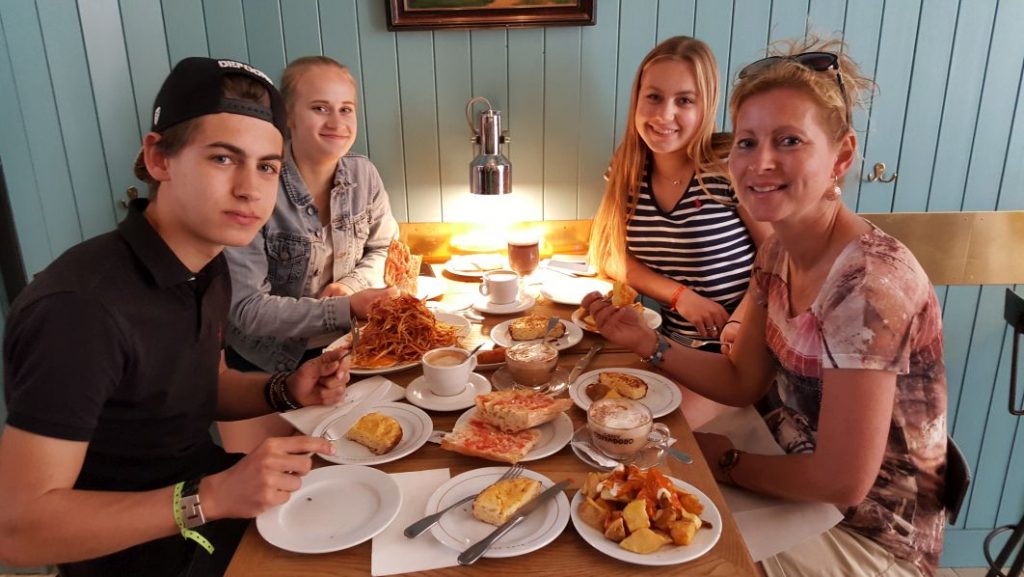 Strengthened by the tapas we can go on the road again. Via the plane-rich Passeig del Born we walk towards the Basilica de Santa Maria del Mar. At the front of the church is a nice square but important, also a tourist shop with sweaters. The sunny shouted for airy clothes but the temperature in combination with the wind and shadow of the narrow streets are really too cold for a shirt. The friendly seller gives us a big discount and without cold we can continue. Deeper into the old city. 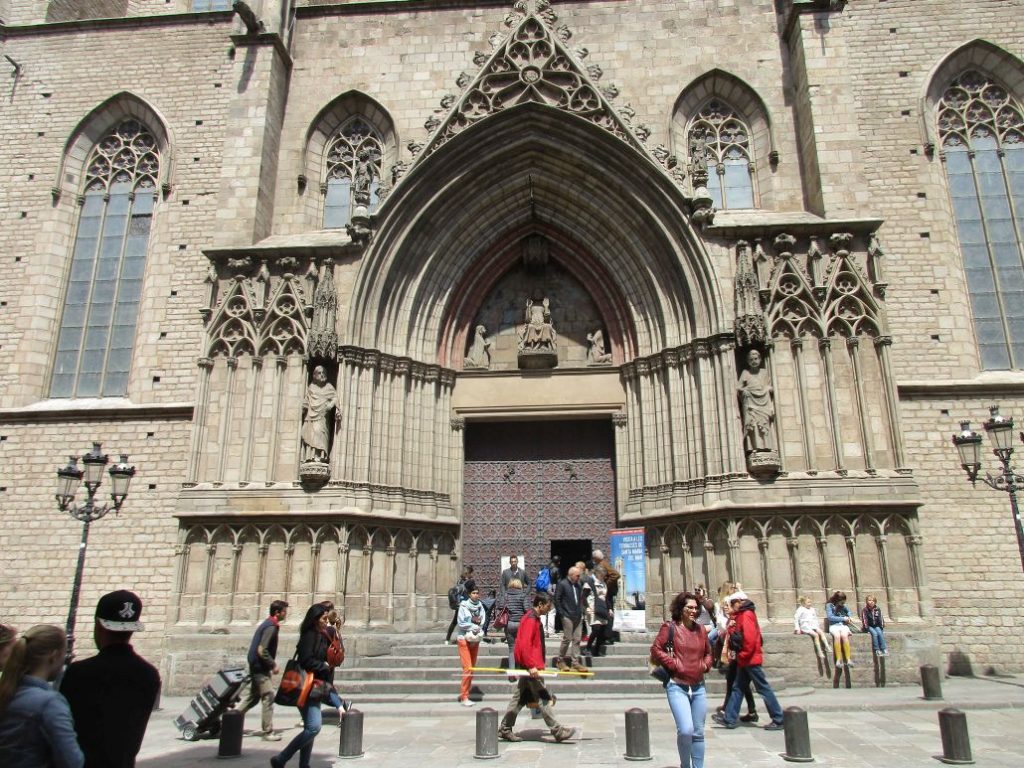 Via the Carrer del Argenteria we carry to the Paça de l’Angel. Via the Carrer de la Tarineria we arrive at a courtyard, turn left here and end up at the back of the Catedral de Barcelona. 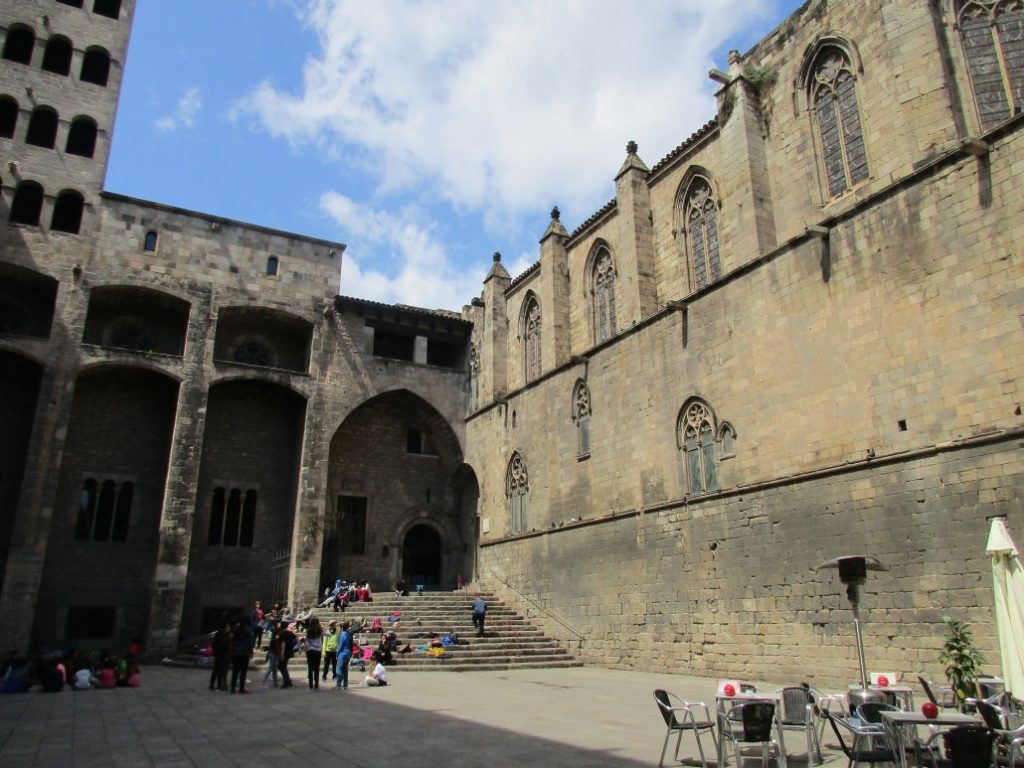 We walk alongside and arrive at the front of the atmospheric square, the Placita de la Seu and Plaça Nova. The facade of the church is very beautiful. On the square there are nice antique stalls where we sniff around. 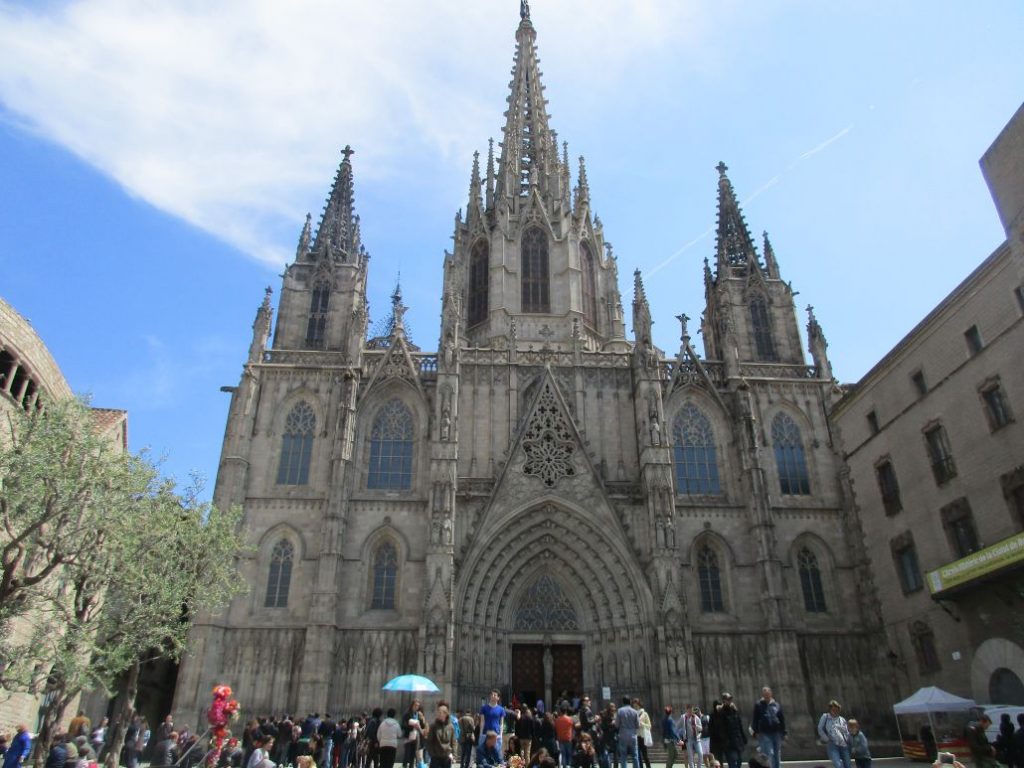 Via the Carre del Bisbe we walk again between the old buildings to the Plaça Sant Jaume. Here we turn right into the Carrer del Call and a little further to the right so that we arrive at the Basilica de Santa Maria del Pi. 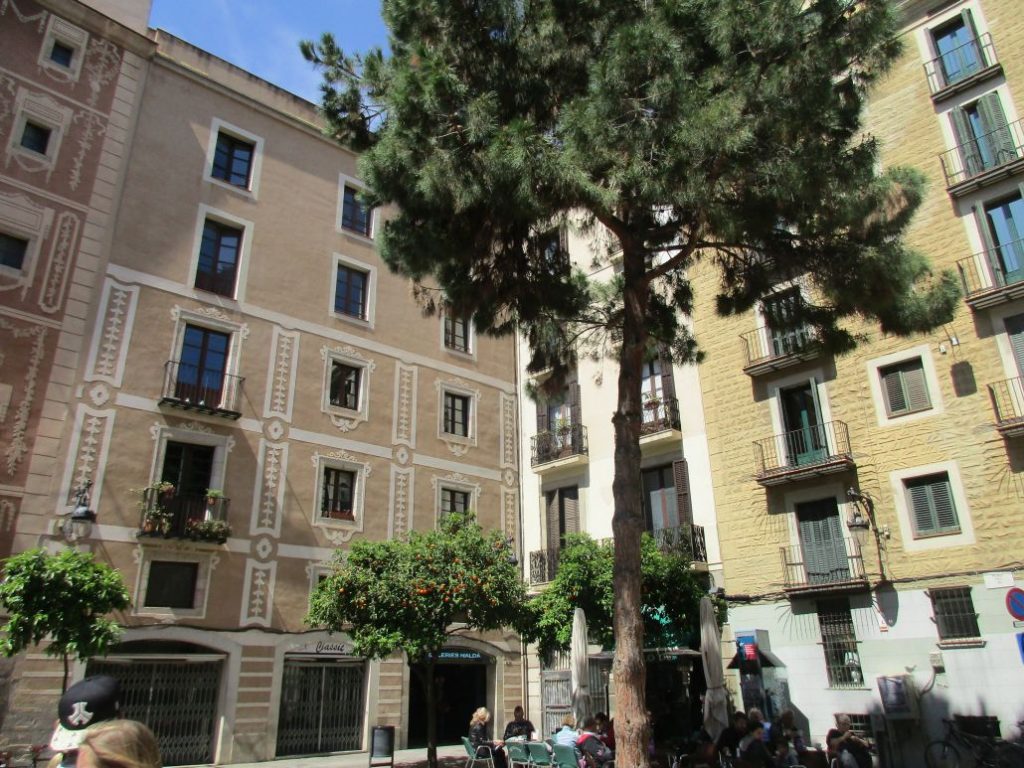 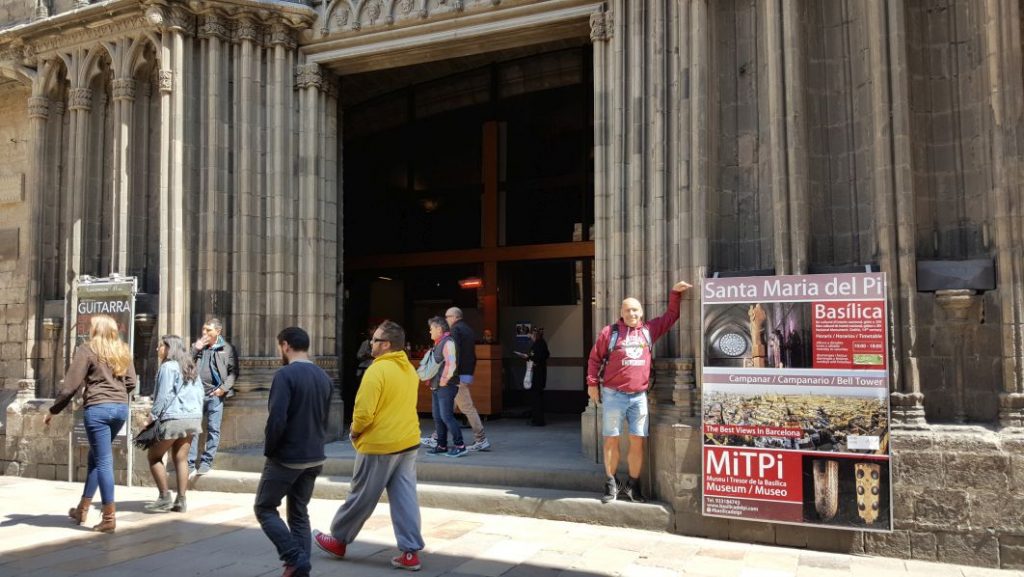 The Rambles was actually a drainage sewer from the past that went down to the sea but has been paved in the course of the years. The middle part is a walking area with all sorts of stalls and terraces. It is also the domain of business rolls, ball ball trick etc .. 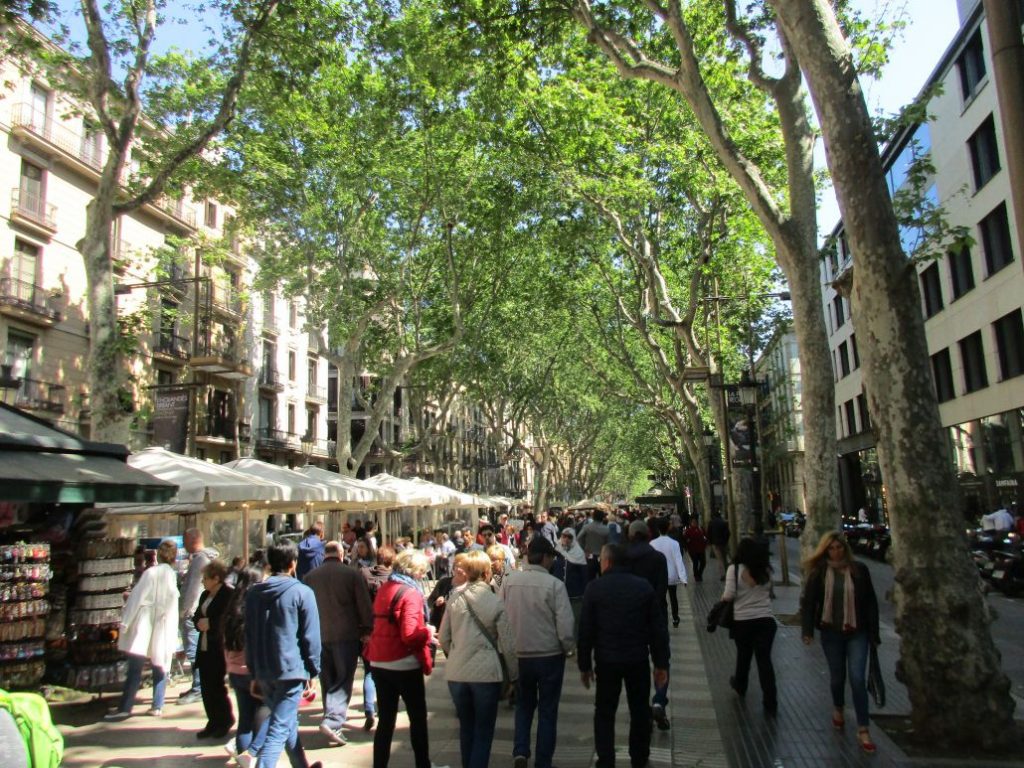 First we cross the street and enter the Mercado de La Boqueria market hall. This is what the kids really love. Many stalls are nowadays aimed at tourists but you still find vegetables, fruit, herbs, sheep heads, fish and much more. 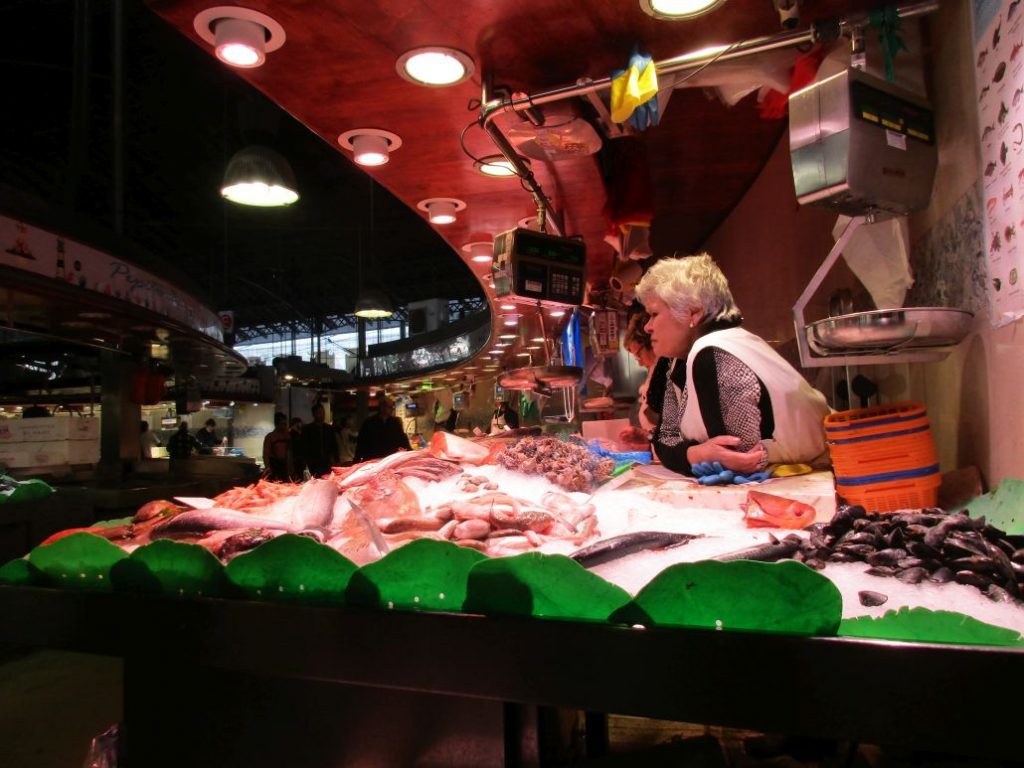 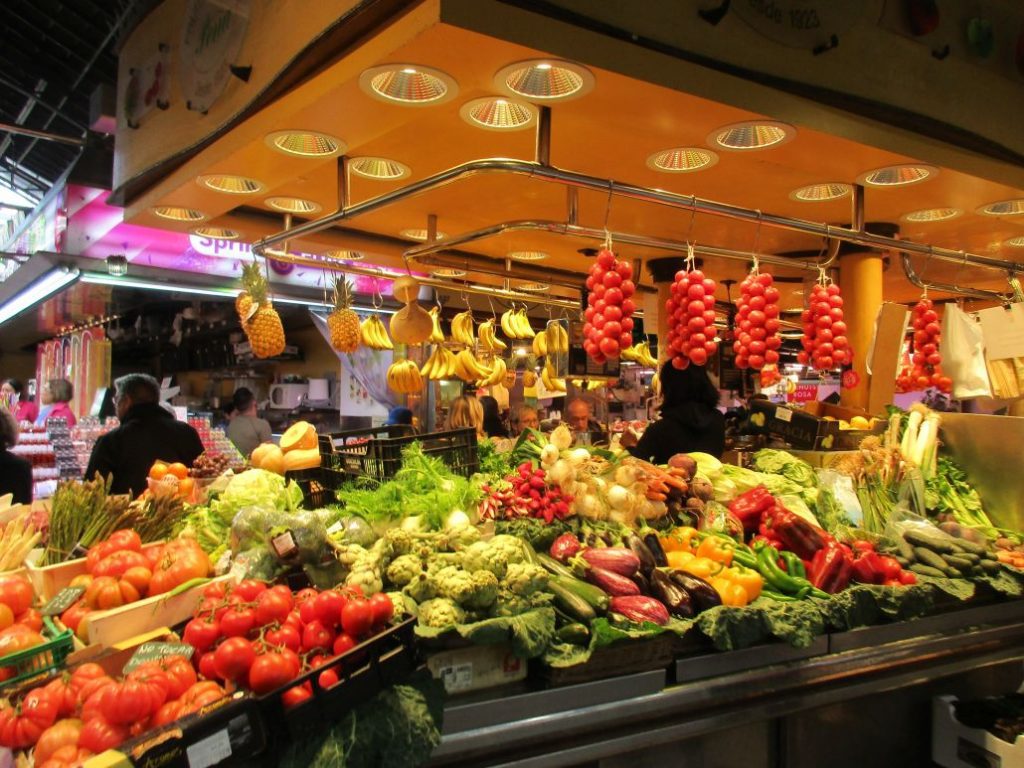 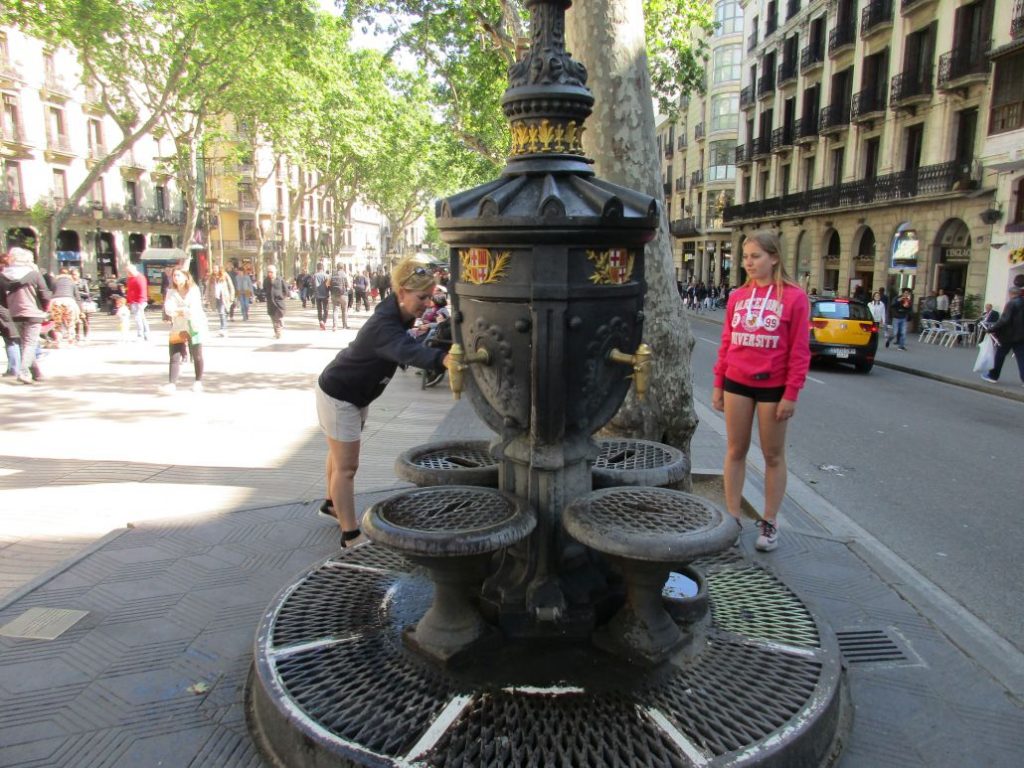 We take a smoothy. We walk a bit off the Ramblas, go into some shops and walk up the Ramblas again. If we are close to the Plaça de Catalunya, we see the famous Fontein de Canaletes on the left. A meeting place and those who drink from here will definitely be back in Barcelona. Arriving at Plaça de Catalunya the rest entertained with the thousands of pigeons. 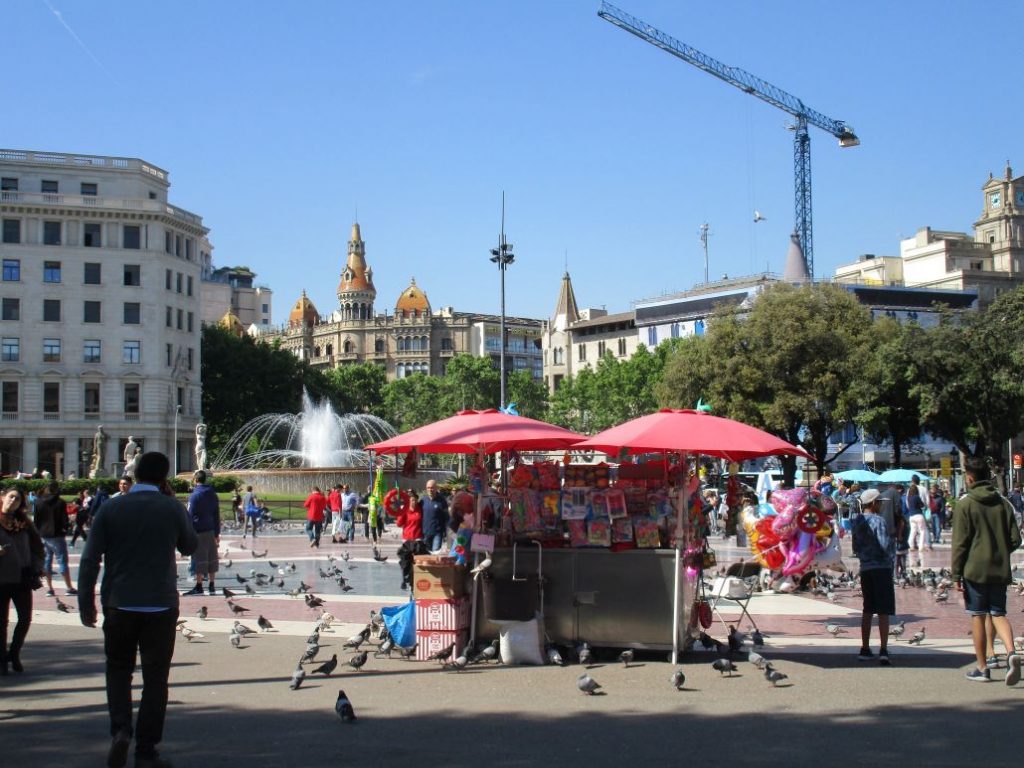 Two beautiful large fountains adorn the square, the place where many football fans have celebrated their party. Here we dive into the subway again.

We get off at Collblanc and walk up the Carrer de Ojèn to the stadium of Barca. Well, who has not been in Camp Nou has not seen or understood Barcelona. For me it did not have to be done per cee, but for the children. At the entrance you can pay 25 euros per person for the Experience Tour first and then we can go inside. Camp Nou was built in 1957 and then expanded several times to more than 99,000 places. The next renovation is already planned.

The first part of the Experience Tour is the museum section with many cups, golden shoes, shirt and photos. We see a number of well-known Dutch people in the showcases such as Cruyf and Van Gaal. 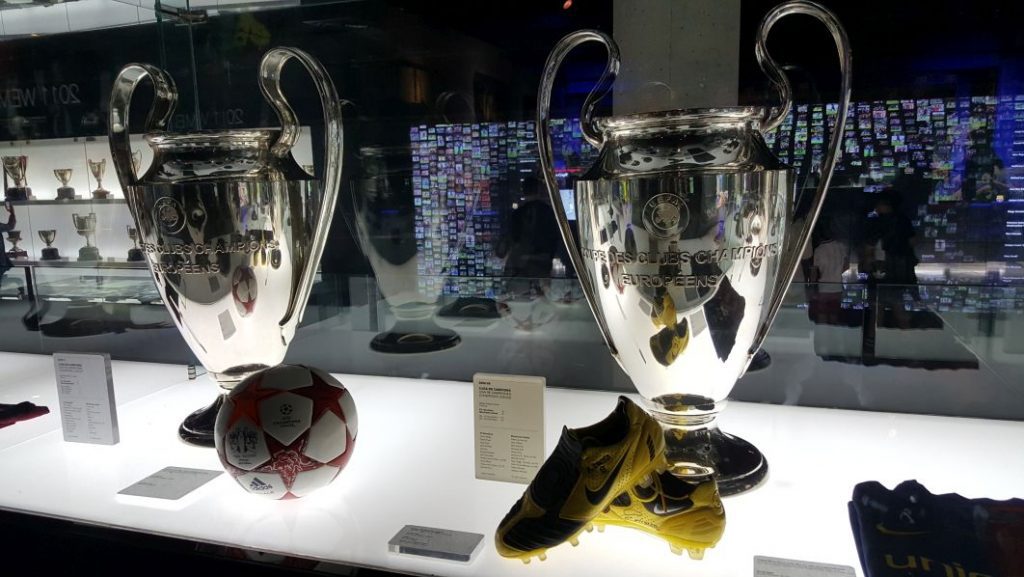 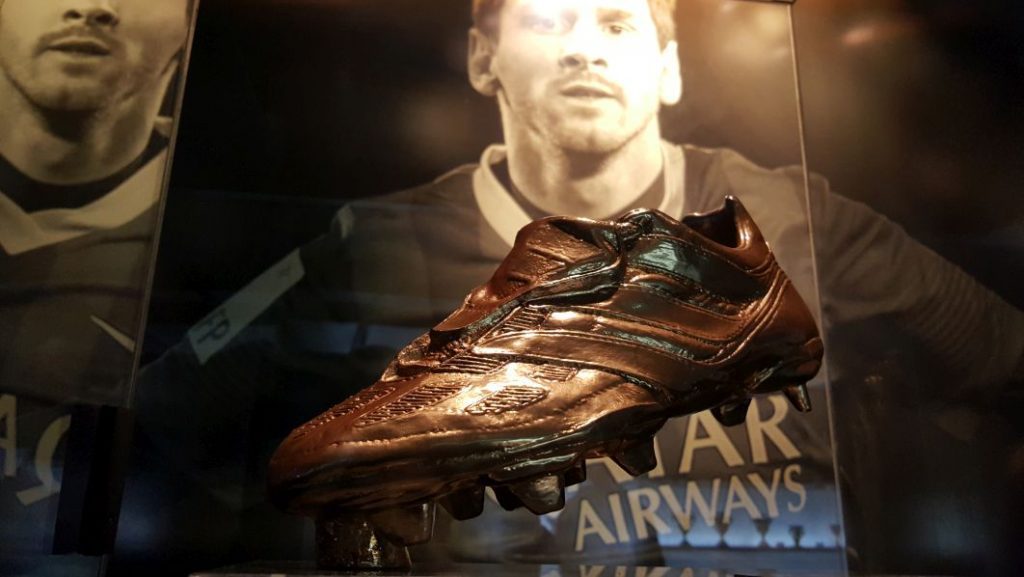 Then we enter the stadium. First from above and then via the player tunnel from the field and the dug-out. Then we are led to the press gallery and the guest’s changing room. 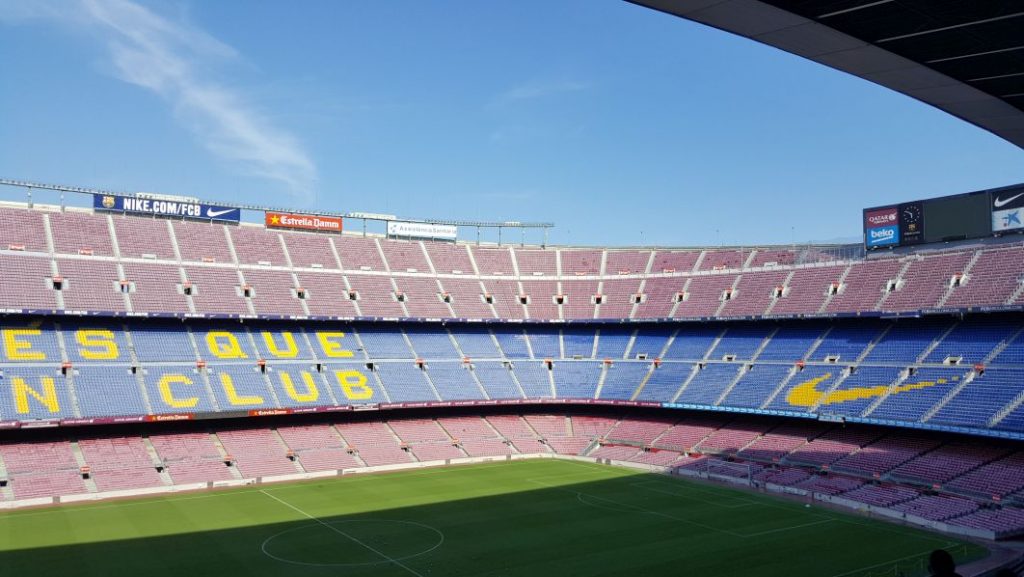 Eventually after some museum pieces we arrive in the big shop where you can turn the rest of your wallet. We leave Camp Nou and head towards Palau Reial metro station. 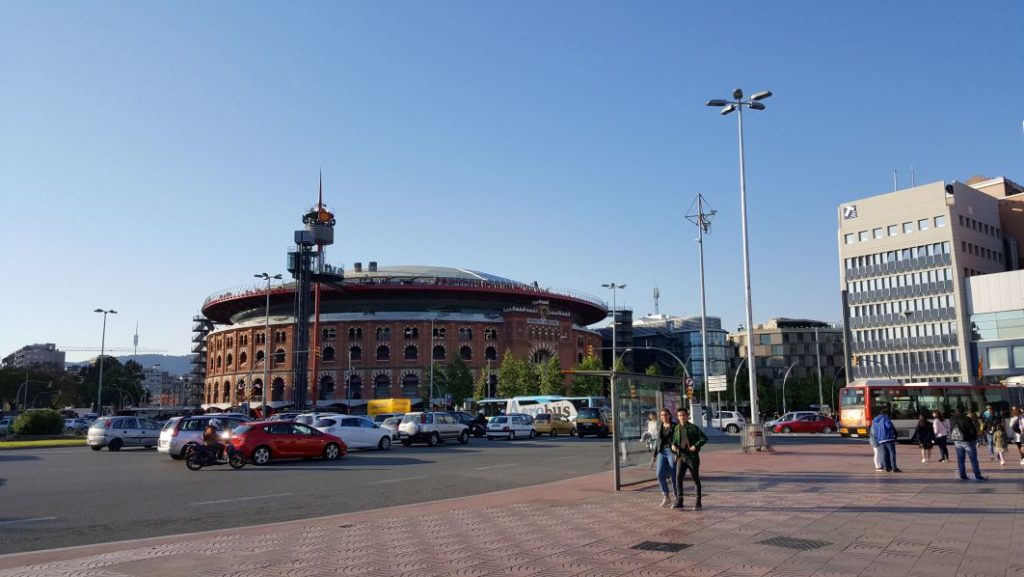 We get off at Plaça Espanya station. We are on the edge of the main square and see the old Barcelona Arena on the other side. Nowadays converted into a shopping center. We walk the other way towards the Palacio National. The avenue is up and dressed with famous colored fountains. However, it is still early, the fountains only give their show when it is dark. 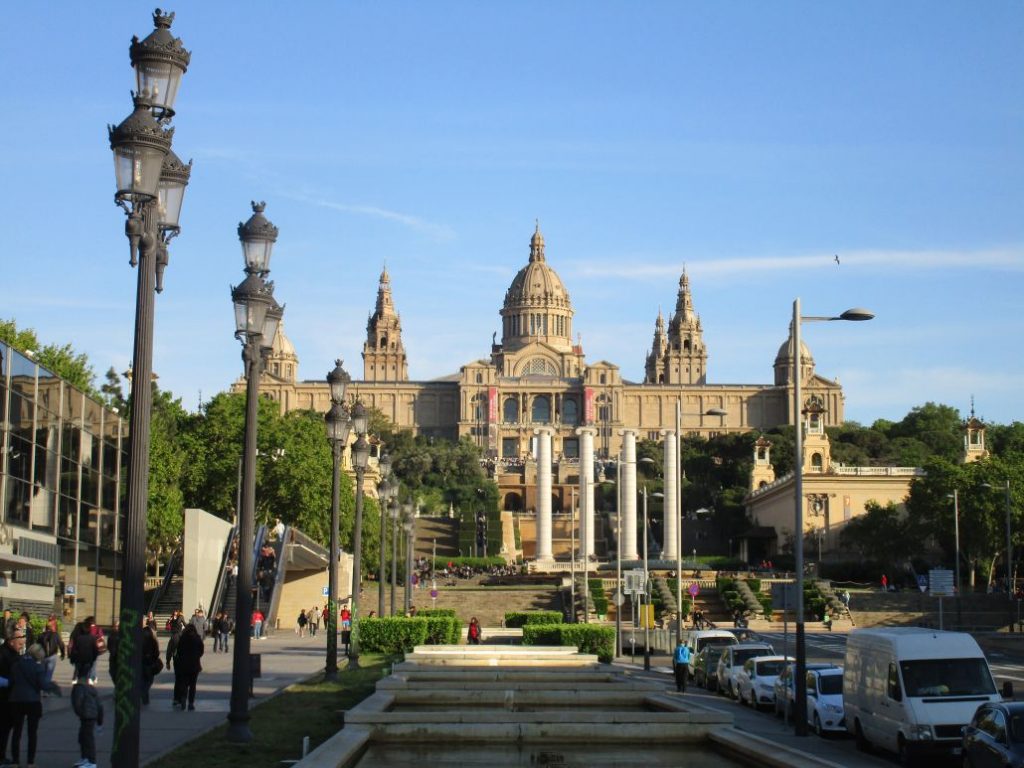 It is teeming with tourists and therefore also with the vendors. When a motorcycle agent shows up, it is just panic and all goods are packed quickly. Much more was not to be experienced today and tired when we are driving we go to the car. We make a short stop for another Burger King. Afterwards to the car and before it is really dark we are out of town …